You can network, tweet, and sell your way to a massive income…

But it might take years to master the game yourself.

Wouldn’t you rather speed things up by learning from an expert?

Your purchase is backed by a generous 30-day refund guarantee.

✅ Either a $0 price tag or a refund guarantee

Do me a favor…

Let me give you the quick pitch for why this product is so useful:

A small sampling of my daily growth

Oh yeah, I was making you count to three.

And I mean really do it, don’t just pretend. Say it out loud, maybe even use your fingers.

Now, count to two (I swear this is going somewhere).

Last one, I promise: Count to ¼ of a second.

“Wa” is exactly how much attention you’ll get from the average Twitter user. They scroll, scroll, scroll, and if your content doesn’t grab them right away, you get ignored.

Just like stocks and real estate, attention runs on a marketplace. You’re selling, other users are buying, but the currency isn’t money. Instead, it’s engagement.

Simply put, if you don’t have great content, you’re never going to make it.

Now, there are two ways to beat this…

The first is having an audience that absolutely loves you, and whenever they see your name and profile photo, they start heading towards the like button without thinking twice.

Unfortunately, you don’t have this audience. If you did, you wouldn’t be reading this.

The second way to beat it is creating content that is so incredibly appealing, it's almost impossible to ignore. The goal of this guide is helping you make that happen.

I’ll tell you one more thing, because I know what it’s like: Failing on Twitter is painful.

I also know that if you put the work in and stay patient, you have a real shot at making this happen.

Before We Go Any Further...

Here’s what people have said about ‘Make It Stick’: 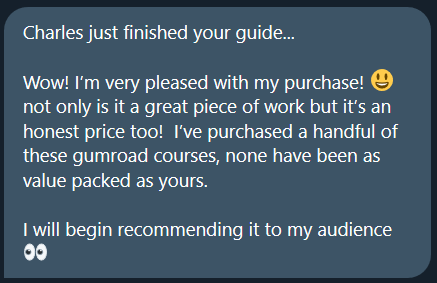 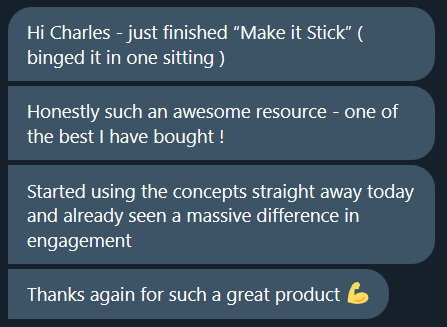 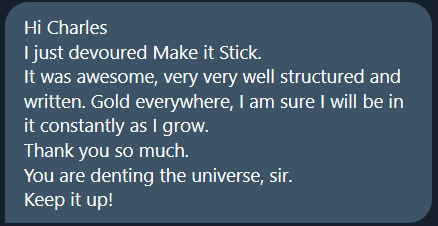 What Does This Guide Teach?

‘Make It Stick’ is a deep dive into persuasion, psychology, and the secrets of creating extremely engaging short-form content.

But here’s what I do have… 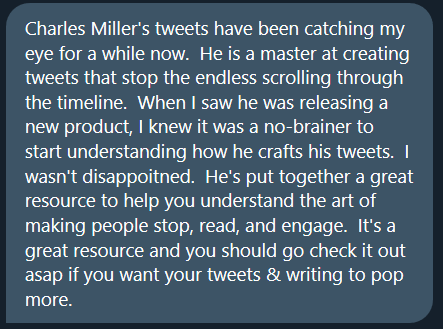 Why? Because you took an idea, wrote it with the proper persuasive devices, and sent it out into the world. That’s the dream for many people, and it could be your reality.

This won’t happen every day, of course.

In the beginning, it might not even happen once a month.

This stuff takes time, so don’t think that this guide is magic.

What I can promise you is that ‘Make It Stick’ will give you a better understanding of persuasion and what kind of content leads to massive Twitter success.

So Much To Gain, So Little To Lose

Alright, so the guide costs you a little bit of money. I get it. Nobody likes to part with their hard-earned cash.

But think about this…

Plus, if you're not satisfied, you get your money back.

That means no risk and a reward that could legitimately change your life.

So what are you waiting for?

A lot of people these days talk about becoming a "social media influencer".

What this package offers you is a chance to look inside my mind.

And it's a chance that could be the key to exploding your results.

The question is... Are you willing to take it?

If your answer is yes, then choose a package below, and let’s get started.

'Make It Stick' plus a short guide on using networking to get your first 1000 followers.

Basic package + my guide for advanced and automated Twitter monetization.

Upgraded package + an in-depth written analysis of your profile and 5 of your tweets.

Afraid you won't get any value out of this?

Well, don’t be. It comes with a generous refund guarantee.

If you aren’t satisfied, just send an email to charles@charlesmillertalks.com, tell me why, and you’ll get your money back. I hate feeling buyer’s remorse just as much as you, so I’m eliminating it. You don’t like it, you don’t pay. It’s that simple.

Mentions of my earnings and success are meant to be aspirational.

They are not typical results, nor am I guaranteeing that you will reach them.

Your results will vary based on personal effort, the current state of the economy, and much more.

If you're looking for guaranteed income, my products are not for you.